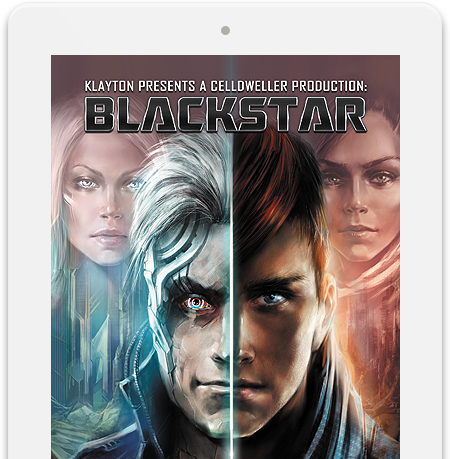 Introducing the long-awaited conclusion to this thrilling space odyssey: 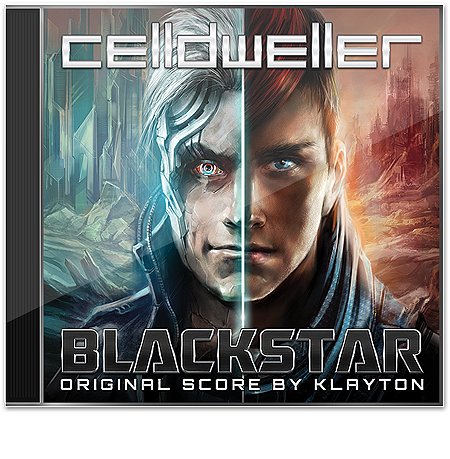 The Blackstar Score shifts across a sonically diverse landscape, from '80s New Retro, dark cosmic ambiance and even hybrid guitar and synthesizer vocal tracks with lyrics inspired by the novel to give you an unearthly throwback to the science fiction of old with modern production that could only come from Klayton. 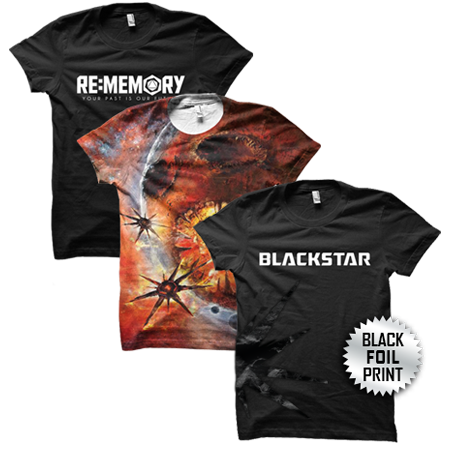 Browse our exclusive line of T-Shirts and other Blackstar memorabilia. Buy a special Blackstar merchandise bundle today and you can wear the imagery of the Blackstar universe with pride.

In a world blasted and barren, the last bastion of civilization is the fortress-city of Central. The people within its walls gladly accept the dominion of Kaine, the city's benevolent arbiter, in return for his gift to them - Re:memory. This public archive contains humanity's memories of the world before it was destroyed, allowing them to relive the lost glories of the past.

Rezin doesn't know who he is or how he came to be in Central, but he does know this: he is a Reaper. His combination of gifts and abilities allow him to decrypt any system and steal information to sell to the highest bidder. His talents afford him a life of luxury until the day he plugs into Re:memory and reaps something he wasn't looking for, something he doesn't understand - and something that Kaine will do anything to retrieve.

Forced to flee into the dangerous Outlands, Rezin must dodge Kaine's pursuing forces even as he finds that the secret he took from Re:memory is transforming him, awakening within him powers he can't control. When he encounters mysterious twins with powers of their own, Rezin begins a journey beyond the confines of the world he knew, a journey that will lead him across space and time, a journey that will bring him face to face with the nature of the universe - and of himself.

It came from the sky.

Some called it the Smash Down, others the Great Collapse.

Some gave it names based on their beliefs -- the End, the Apocalypse, and the Judgment.

By any name, it was the same event -- the moment of impact. The moment Solaris collided with our world and the earth went dark.

The few who survived came to call it the Blackout, and that was the name history remembered.

Tides surged. Skies darkened. And civilization perished beneath its flames. But from the ashes, survivors rose and rebuilt.

Now the privileged dwell in Central - Earth’s last city. The others, kept away by Central’s great walls, cling to harsh life in the Outlands.

Despite their differences, they share the same struggle. All seek to reclaim what the Blackout stole from them: Humanity’s lost past and glories.

And so it was that Re:memory was created to give birth to Retros: memories from another time and place fed directly into the minds of the survivors.

For only citizens of Central are granted access to Re:memory’s Retros.

Everyone else relies on the black market.

Everyone else relies on Reapers to patch-in and steal.

Everyone else relies on Rezin.

REZIN RACED, SEARCHING FOR shadows in a city that had none.

The decryption had gone well, but they all did. This one was no different from any other, from any of the dozens of others he’d decrypted since he learned he could bypass systems.

Rezin knew as soon as he patched into Re:memory that this was going to be a big job, one with a big payout. He could tell – he’d always been able to tell. Ever since the first time he discovered that something within himself let him decrypt Re:memory — the storehouse where they kept the material most worth reaping — Rezin knew to make the take and get out without getting caught. Before the Blackout, reapers, or as the old world called them: hackers, used their hands to bypass systems. They relied on analog keyboards and some street smarts to penetrate security. But in today’s world, ever since the giant rock Solaris punched a hole in the earth and gave birth to the Blackout, everything’s changed. Central’s systems had to evolve. Today, they are faster, stronger and smarter. Reapers have to augment themselves with a chip and cerebral implant to get through.

Reaping used to be work. Now it’s an art form and Rezin its greatest artist. But Rezin couldn’t always pick what he took, couldn’t always choose what he got. He’d be even richer if he could. People had lists of wants, and their friends had lists of other wants, and they all had money. If Rezin could have picked his gets, scoured for specific Retros, he’d have had it even easier than he already did.

If he could have patched-in remotely from his digs, he’d have done that, too, but he had to be close, close enough to touch the outer walls of some of the poorly secured facilities he’d decrypted.

With Re:memory, he had to be even closer. He had to be inside the building. Which was not hard –Re:memory belonged to everybody in Central, or so Kaine, Central’s leader, told the city’s citizens.

Nobody completely believed him, and most people didn’t even partially believe him. But it didn’t matter. There were booths and kiosks for the general public, private rooms and even, some said, opulent suites for the wealthy. And whether in a booth or suite, a small fee let the visitor tap into the “Retros” - remembered treasures of the forgotten past - and lose themselves for an hour or two – longer for the wealthier – in other times.

Some said that the memories fed to them through the taps in the kiosks and suites were as false as the lies that led customers to the storehouse: not memories at all, but artificial experiences manufactured at the command of the leadership, and used to distract the public from the more awful aspects of their present. Not a real memory in the place, some insisted.

Others said the memories the public was allowed to tap were only the most innocuous, diverting, pleasing memories. Nothing too strong, and nothing that could short anybody out. They said, too, that the selection queue of accessible memories that customers could choose from wasn’t even the tiniest fraction of what Re:memory held, not even a hint of the treasures and dangers the storehouse contained, and that they were withheld from the public by the city’s leadership.

Rezin knew that was true, and didn’t even come close to describing just how rich in memories the storehouse was.

The memories beyond the queue were, after all, what were making Rezin a very rich young man.

And they were what he was after today.

He wished there was a selection queue for his targets. It would be a dream just to scan the contents, pick his takes, reap them out and sell them. But once patched-in, whatever it was in him that let him bypass systems only worked if Rezin let the process guide itself. He knew what people wanted, and he knew what he could get for a good Retro. There were customers in the city, but there were customers in the Outlands too, he knew, and sometimes he could play them against each other.

Depended on what he got. How things used to be done was what the Outlanders wanted – practical, usable Retros.

Everybody had too much of now. Nobody wanted any more of it. How it used to feel was what most of the city’s Retro-collectors desired.

“How they made crops grow,” was the top want in the Outlands, so Rezin had been told by his fences.

“The last good day before the Blackout,” or, from darker-souled customers, “The opening moments of the Blackout,” were requests Rezin had heard more than once from customers in the city.

Not all of his customers were predictable, either. Though he hadn’t worked with them directly, the fences the Outlands used to move Retros beyond the barriers that surrounded the city told him that some in the Outlands wanted former feels. And he’d found a few in the city, richer than most, and far richer than anyone in the Outlands, who’d paid and paid well for schematics, plans, instructions from the past.

But it was tricky selling such things in the city – he made sure that the people he dealt with would keep their newly acquired Retros quiet for a while after the transfer. That rule held for former how-it-used-to-feels as well as former how-it-was-dones. Anybody doing business with Rezin was somebody who knew how to keep quiet. That was how Rezin kept from getting caught.

Until now, he thought as he rounded a corner still too close to the Re:memory building and spotted two Scandroids gliding fast in his direction. Rezin scoped out the area, brushing away curly locks of brown hair from his pudgy face. He backstepped, dodged and danced his way through the few people on the boulevard, ducked down a sideway, fighting hard to keep from looking to see if the Scandroids followed. He walked fast without looking back or up, but not fast enough to attract attention.

When he did, he was pleased to see no Scandroids.

Pleased but not relieved.

He wondered if he would ever feel relieved again. 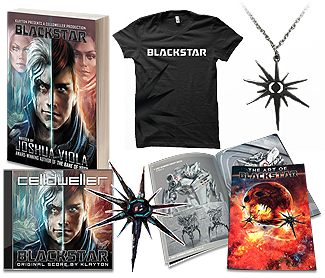 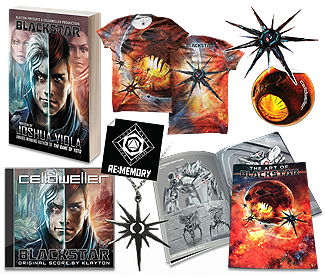 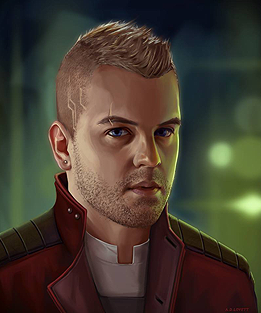 Joshua Viola is an author, artist, and video game developer. In addition to creating a transmedia creative franchise around The Bane of Yoto - honored with more than a dozen awards - Josh is the author of Blackstar, a novel based on the work of acclaimed electronic-rock musician Celldweller. Josh lives in Denver, Colorado and can be found on the web at: 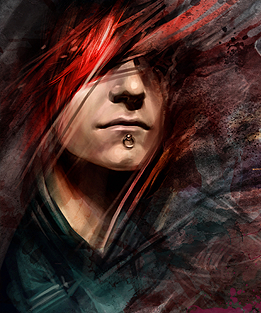 Klayton Is a multi-instrumentalist, producer, songwriter, performer, remixer, and entrepreneur. This New York native is best known as the one-man machine behind the electronic / rock hybrid Celldweller. His music has been heard by millions from internet play and placements featured in major Film/TV/Video Games. Klayton owns FiXT, which operates as an independent record label, music, and merchandise retailer, publicity firm, and book publisher. Klayton is currently launching a brand new sci-fi clothing company, Outland, executive producing a number of films, and a co-writing an upcoming horror film. For more info, visit: